World AIDS Day is coming up on 1st December and we have been working with the brilliant freelance web app developer and fellow FuseBoxer Rich Plastow on an online game commissioned by the International HIV/AIDS Alliance. Here it is live as of today! Go play http://CellSurvivor.org 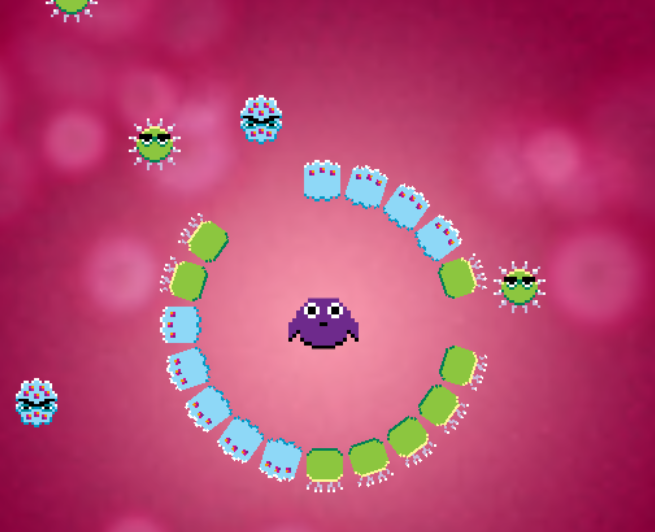 First challenge is to see whether you can score enough points to knock Rich off the leaderboard. So play the game, get the message, and spread the word for World AIDS Day 2014!

The game dynamics are loosely based on Breakout, the influential 1976 arcade game by Atari which was developed by Apple co-founders Steve Jobs and Steve Wozniak. Cell Survivor also features some lovingly crafted retro graphics and fantastically groovy sounds.

It is intended to engage new and younger audiences with the work of the International HIV/AIDS Alliance and issues that young people living with HIV in the global south face every day.

The aim of the game is to help protect a single CD4 cell from viruses including HIV. Condoms are the first weapon of defence to ward off HIV and other sexually transmitted infections. Once the player runs out of condoms, the cell becomes infected with HIV. However this is not Game Over, as antiretroviral tablets then help to keep the player’s cell alive.

Watch the brilliant mini-doc by Beth Walker that follows Rich and the game Cell Survivor through the development cycle.

The final level of the game sees the removal of both the condoms and the antiretroviral tablets, which is the reality for many young people living with HIV around the world who do not have access to such life-saving support.

There are an estimated 2.1 million adolescents living with HIV, more than 80% of whom live in sub-Saharan Africa. HIV testing rates among adolescents remain low with most adolescents not knowing their status and often needing more support, including tailored interventions, to stay in care and adhere to treatment.

Through the Link Up programme, the Alliance is aiming to improve the sexual and reproductive health and rights of more than a million young people aged 24 and under who are living with and affected by HIV in Ethiopia, Bangladesh, Burundi, Myanmar and Uganda by 2016.

The HTML5 game is being hosted on GitHub pages and contains information on living with HIV. It is an open source software project so that anyone looking to get into coding can tear it down and learn how it works, or even go further and fork their own version. Make sure you read Rich’s excellent documentation to help get tooled up for HTML5 game development and see a detailed development cycle.