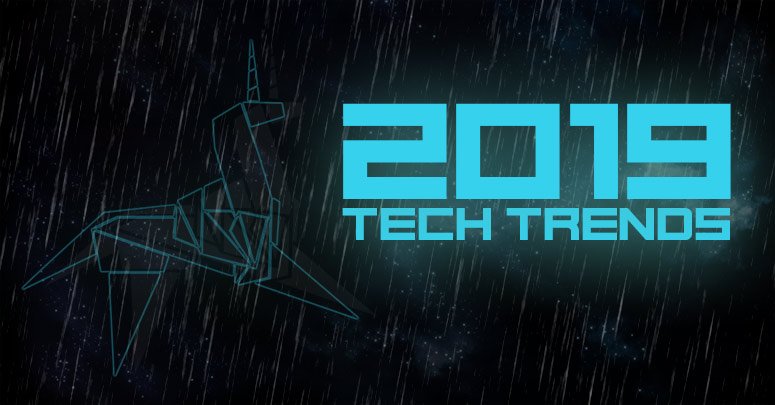 Set in a dystopian 2019, the epic sci fi film Bladerunner correctly predicted overwhelmingly large digital billboards, flying cars, and computers that we would interact with through speech, though it didn’t necessarily see them fitting in our pockets.

The film also depicted climate collapse through endless rains and androids that most people couldn’t tell from humans, but thankfully we’re not quite there, yet.

In 1983, a year after Bladerunner’s release, one of the fathers of sci fi writing, Isaac Asimov, was asked for his predictions for 2019 by the Toronto Star. They included ubiquitous computers and mobile devices, and their use and growth fuelled by an increasingly complex society, overpopulation, and pollution. His predictions were mostly impressively on the mark for a society that has gone through such a rapid transformation, especially considering the predictions were prefaced having to force the assumption that there would be no nuclear war. He signed off saying that 2019 would be a bridging point for far greater changes that would follow.

Without doubt we are at a pivot point in society’s advancement. There are so many life altering technologies on the cusp of becoming mainstream, and they are no longer isolated developments in individual areas but changes that coalesce and accelerate one another. As we’ve seen prediction is a tricky business, but here are our top ten tech developments to keep an eye on in 2019:

Artificial Intelligence is a current buzz word, and the subject of many dystopian sci fi novels, but the biggest steps are in the branch of AI called machine learning, whereby a computer system is given enough data to learn and make informed choices without being explicitly programmed. It is being used in apps, websites, to fill our recommended content feeds, in autonomous vehicles, security systems, and recently to create music, and works of art.

This one was actually talked about by Asimov, how the unskilled repetitive tasks would be taken over by robots. We’re already seeing fully automated warehouse and companies from companies such as Amazon who chase down consumers with the promise of the same day delivery. Coupled with the advances in AI, the prospect of having autonomous robots deliver your package by ground or air represents an end to end automated process. While it won’t hit all areas of employment, studies are already looking at the work areas and people most affected.

After the initial gold rush of the Internet of Things, this technology is coming of age. Once we see responsible security and data handling this technology will be found in everything from home automation to healthcare, with devices hooked up to the internet and ready to share data. 5G connectivity and the increase in data transfer speed will open a pandoras box of possibilities and the number of connected devices is predicted to rise from 8.4 billion in 2017 to a massive 50 billion in 2020. *source. Along with the internet of things, there is now a IOB, Internet of Bodies, and a ‘human API’ that reflects our own connection to health tracking apps and wearables and the production of biometric data streams.

We’ve been waiting for AR to step out from the shadow of its bigger brother. It is partly down to experience and hardware accessibility, but now we’re moving on from pointing our phone at things to dedicated hardware in the form of glasses. Prices are coming down, content is going up, AR is here to stay. It is also being merged into the umbrella term XR (cross reality), which shows it is being given the same prominence as VR (virtual reality) and MR (mixed reality) in current development circles.

2018 saw huge backlashes against the big corporations harvesting and misusing personal data. The realisation that users no long want to be an unwitting product is becoming more widespread. This will hopefully lead to new business models that don’t just rely on harvested data. 2018 also saw the introduction of the GDPR, hailed as ‘the most important change in data privacy regulation in 20 years’. However, as much as one area is outed, another threat arises, with reports that countries are using biometric and social data streams to assess their loyalty to the state *source.

Whereas content has often been throttled or ‘made for mobile’ due to processor or bandwidth limitation, these barriers are rapidly falling. With the introduction of 5G, it is claimed that the speed increase will completely change the mobile digital landscape. Already we’ve seen a massive change with always on mobile data, but now bandwidth heavy 3D, AR, VR, and mobile gaming content will have barriers removed. Though the technology is still in development, the speed increase is theoretically possible to be 100 times faster than 4G.

Though it may be a number of years before this is fully realised, the promise of what it offers is enough to ensure that this one stays on the radar. Quantum computing offers the possibility of the next leap in computer speed and power and has a whole new approach to calculation based on quantum mechanics. These next generation super computers will be able to solve problems that todays binary computers simply can’t.

Healthcare is one of the big new marketplaces that the mega tech companies are all staking claims in, including Amazon, Google, Apple, and Microsoft. Healthcare has become an area of innovation, with applications for AR, VR, chatbots, AI, 3D printing, and health tracking mobile apps and devices all finding purpose. With new apps and wearables, consumers are now being encouraged to take responsibility for their own health and there is more health data available than ever before, pointing to a further digitisation of health consultations and a move away from a traditional doctors surgery.

The volume of data we create in an ever more connected society is unprecedented. In order to make this data meaningful there is a growth in what Gartner has called ‘augmented analytics’. It predicts a move towards a citizen data scientist who, armed with the latest automation tools and capabilities of AI, will enable data science capabilities to be broadly available. This is part of a bigger move away from traditional data analysis to having machines examine, correlate, and find meaning in huge data sets. According to Gartner “by 2020, more than 40% of data science tasks will be automated.”

Though blockchain largely was focused on crypto currency in 2018, with increased privacy concerns we will most likely see it making a comeback in areas such as healthcare where privacy is paramount, and to help solve security issues in new data flows created by the Internet of Things and personal data.