Now that we have had a chance to take a deep breath after the Brighton Digital Festival, we have put together a few thoughts, facts and figures about our 3D scanning and printing art installation.

We managed to pull off Break The Mould in partnership with tech start-up 3Dify and Italian artist Emilia Telese in a very short period of time (approx. four months). It was an interactive installation where people could walk inside a giant womb to get scanned and digitised, and then watch themselves being ‘reborn’ on a 3D printer as a mini sculpture.

The installation made its debut at the Brighton Maker Faire on 7th September and was showcased at three other venues throughout the Brighton Digital Festival including the Jubilee Library, Clearleft gallery space, and Mad Hatter Cafe.

Within days of launching, we had to start a booking system to deal with the demand and quickly became fully booked for the entire festival. Local artists including musicians got scanned with their instruments such as a saxophone, flute, and guitar, photographers and filmmakers were scanned with their tools of the trade, street artists with spray cans and masks, performance artists with juggling clubs and a unicycle, librarians and writers were scanned with books. 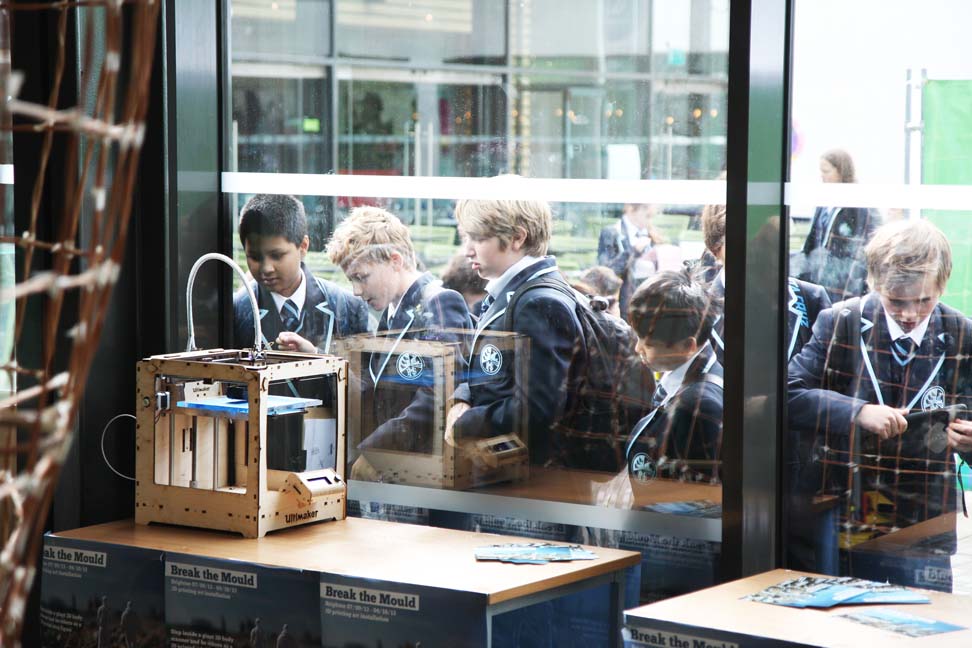 We were invited by the BBC World Service Click radio programme to take part in a debate about 3D printing where we presented 3Dify’s body scanner live on air. We also presented at the monthly Brighton Pecha Kucha and Café Scientifique events. 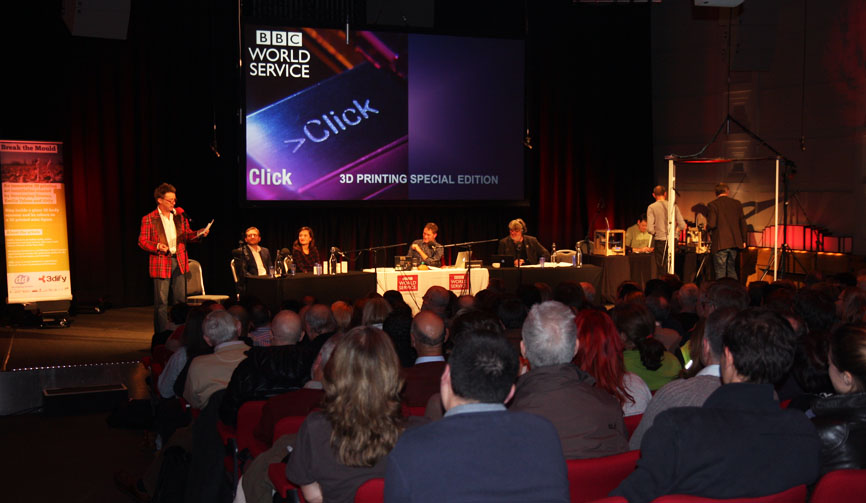 The installation received support from some of the big names within the 3D printing industry and the Brighton digital scene including Ultimaker, Faberdashery, MCR Print, Sarita Frit, and Brighton’s new hub for the digital and creative sector The FuseBox run by Wired Sussex. In return for in-kind sponsorship and support, partners received some media exposure and were offered branding opportunities at the installation and in promotional materials.

Alex Mayor, Director at Ultimaker GB, said: “Break the Mould was a ground breaking concept that allowed people to understand the potential of the 3D printing world in a very tangible and personal way. Ultimaker had to get involved with such an amazing project… The guys at Break the Mould have been fantastic to work with and are true pioneers in bringing this idea to life…”

Andrew Dent, Co-founder of Faberdashery, said: “While there have been public demonstrations before using 3D scanning, they typically focus on the technology, rather than the social and artistic impact of these new techniques. Break the Mould successfully combined leading edge technology, with a presentation style focussed on an organic and human centred approach. The installation created new dialogues around the creative potential of the emerging 3D technology…”

More than 400 people actively took part in the installation – got 3D scanned and received a little 8cm big sculptures of themselves printed in bio-plastic. Approximately 450 people attended events, presentations, and talks where Break the Mould was either the main focus or one of the main features alongside other artists or 3D printing projects.

In total the installation has been viewed by approximately 60,000 people during its Brighton Digital Festival tour, which includes visitors to the Brighton Mini Maker Faire, Jubilee Library, The New Sublime exhibition at the Clearleft Gallery, and passers-by at the Mad Hatter Café.

Sue Gollifer, Director of ISEA HQ (International Symposium on Electronic Art), University of Brighton, said: “…I was interested in participating in ‘Break the Mould’ project… It was an unusual concept of engaging the audience in a performance using a 3D scanning device to create not only an interactive space around the notion of the body, but to also produce individual small 3D art works of the individuals collaborating in the project…”

Kate Genevieve, artist and founder of CHROMA collective, said: “It was really generative and fascinating to share a gallery space with 3Dify and Developing Dreams. Their installation Break the Mould brought in members of the public each hour who could then explore the rest of the New Sublime exhibition and the artworks.  The artists were informative and extremely generous with their knowledge.  CHROMA, my artists group, were able to investigate 3D printing up close: this had been a long time interest and it helped us plan one of our next projects.  I hope to continue this connection and that 3Dify and Developing Dreams will be involved in our future project around printing physiological data as 3D sculptures.”

We are extremely grateful to the support and guidance the Arts Council England and WiredSussex have given us and it looks as if they like us which is a bonus!

Phil Jones, Managing Director of WiredSussex, said: “It has been really great to have Break the Mould 3D printing project here at the FuseBox. A fantastic practical demonstration of how technology can help artists develop new ideas, think about new ways of working, and attract a broader audience for their work.”

If you want to know more, don’t let anyone stop you from reading the summary of our evaluation report below and feel free to check out our press clippings!