PLEASE NOTE: We are now fully booked for the Brighton Digital Festival! You can still visit the installation and see a 3D body scanner and 3D printers in action, but unfortunately, we don’t have any spaces left to get people scanned and print little figures of them.

With the help of Italian installation artist Emilia Telese and some technological wizardry from 3Dify, Developing Dreams are dragging the concept of the photo booth kicking and screaming into the age of 3D printing and low cost 3D scanning. 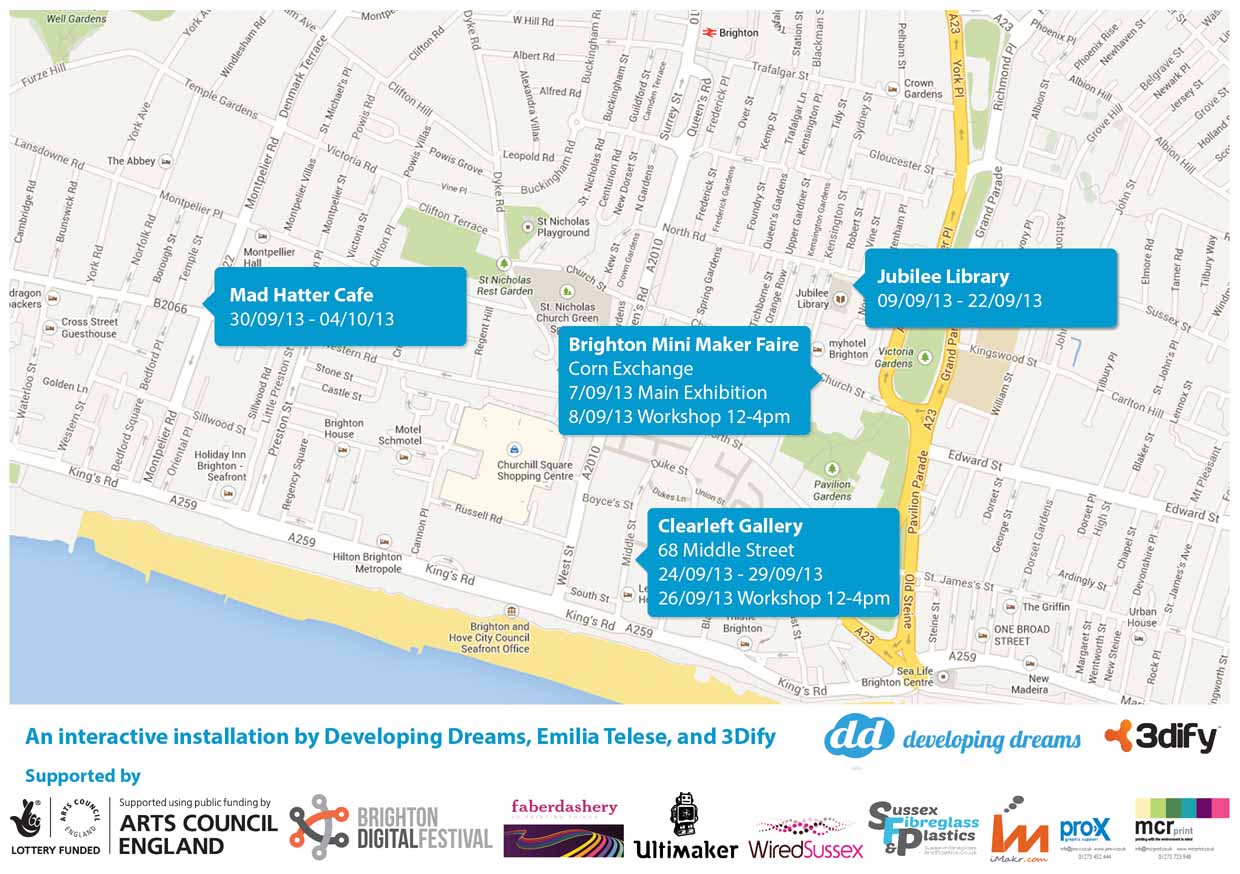 Kati Byrne of Developing Dreams, the Brighton based digital agency behind Break the Mould, said: “We wanted to give people the opportunity to experience this emerging technology in an immersive environment that is personal, memorable and engaging. Many people have heard about 3D printing, but only a few have seen it in action, which is something we would like to change. Break the Mould has been so popular that the word about it has spread like wildfire.”

Markus Rayner of 3Dify that designed and built the 3D body scanner said: “3D printing is still an early phase technology and we built the body scanner as a proof of concept model for the Brighton Digital Festival. We are currently exploring further possibilities of this technology and working on our own prototype large format Delta 3D printer and a desktop scanner. It has been extremely interesting to see how the general public interact with and respond to this technology.”

Emilia Telese, the artist who designed the giant sculpture, is known for her installation of the Royal Pavilion made out of rice, and has exhibited worldwide at the 51st Venice Biennale, Tate Britain, Royal Festival Hall, and the Louvre.

She said: “3D printers are very mechanical and impersonal. I wanted to add something feminine to a male dominated world such as the technology industry, which is where the idea of motherhood came from. Getting a little sculpture of yourself is like giving birth to a little you. I hope this installation will help make 3D printers more human and accessible.”

The installation has the backing of some of the big names within the 3D printing industry and the Brighton digital scene including Ultimaker, Faberdashery, MCR print and Brighton’s new digital hub the FuseBox, run by WiredSussex. Nikki Gunson of SameSky created the giant willow sculpture that’s housing the 3D body scanner, and film maker Sarita Frit kept a close eye on us through her lens.

One thought on “3D printing mini sculptures of yourself – a new trend spreading like wildfire?”