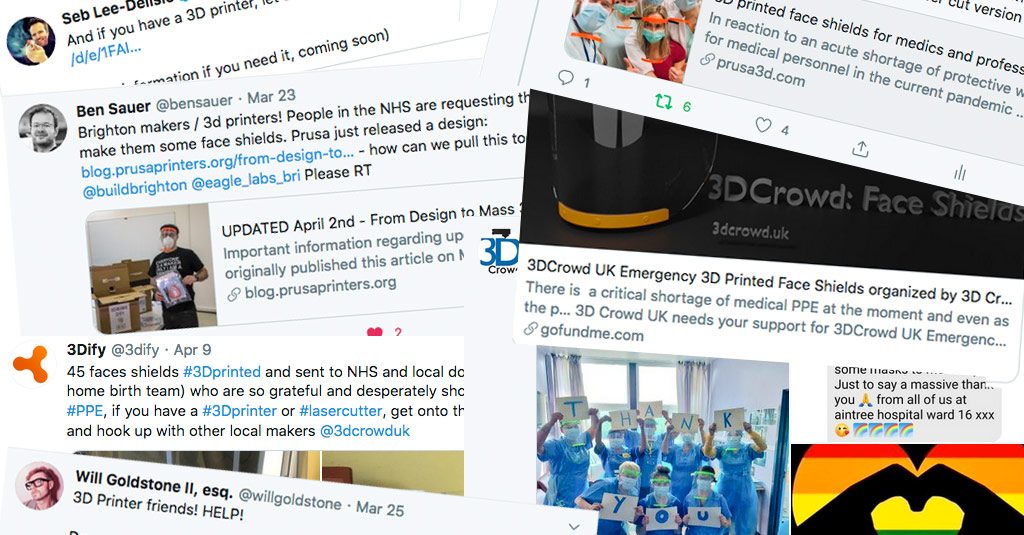 The hashtags of posts around it told the story, #PPE, #NHS, #Covid19, #3Dprinting, there was a form to sign up to a group, it was necessarily hasty, reactive, the word being spread by digital whispers while the group and the people joining it quickly found their feet and hit the ground running.

A slack group was up, channels being put in place, the word was spreading, and people in the UK were joining the effort or putting money into the crowdfunding pot. Through the magic of technology they were connected, and after downloading a file created by Prusa for a 3D printable headband, people could set to work creating the face shields that frontline workers so desperately needed.

A local doctor, who was given a box of 3D printed face shields told us how PPE was beginning to trickle through but all from volunteers, and that one of the care homes they covered already have a confirmed covid19 case. It is a story similar to many on the 3D crowd forum and elsewhere on social media, those most at risk lack the most basic of PPE equipment.

The 3Dcrowd community had grown to well over 8,000 people making PPE in the UK at the time of writing. There are other groups in the UK that are doing similar work, and there are similar efforts all around the globe. There are pods using 3D printed parts to create ventilators from snorkel masks, adapters for ventilation systems, people laser cutting designs for faster production and efficiency, and knowledge is being shared from one country to another.

The technology that allows for people to create digital models and post them for a whole global community to adopt, adapt, and be able to physically manufacture, shows how powerful the spirit of collaboration can be.

It is not too late to get involved, as well as the overwhelming demand by the NHS, there is a looming secondary demand for care workers, delivery drivers, shop workers.

3dcrowd.co.uk is just one place where you can volunteer to help if you have a 3D printer or laser cutter, request face shields, or make a donation to their crowdfunding